Don’t you love it when you hear of those outrageous and out-of-this-world happenings from people on the other side of the world, and you can sigh and think “Only in [insert country name]“.

Of course we all love it when it’s Amelika / America, because that’s the place where ‘dreams’ come true, and everyone is rich and famous, but when you see the weird and wonderful happening, you think, “gee, I’m glad I don’t live there”.  Or the alternative feeling, if we have a connection with the place is “gee, I’m glad [insert country] is the way it is”.  Makes it unique and brings a smirk to your face.

Well, our beloved Samoa is no stranger to either of the above feelings.

The Samoa Observer reports that not only one ship has grounded into Mulinu’u reef in Apia, but two! (”Only in Samoa… gee I’m glad Samoa is the way it is”.) The first was a container ship, Forum Samoa II, which was recently bought for AUSDmillion.  Some three weeks ago, Pacific Forum Line and Samoa Shipping Services bought the ship.

Samoa Observer says the ship was on its maiden voyage when it struck problems during the weekend.  And yesterday, it was still stuck on the reef. It is expected to spend at least two more days there.

Shortly after another vessel ended up on the reef at Mulilnu’u Peninsula.  This time it was a fishing boat, the Tifa i Moana.  It was grounded a few yards from where Forum Samoa II is stuck.  The two crew of the vessel who “walked” to shore at low tide said they were grounded at 6am yesterday. Now that’s some pretty funny news.  The blind leading the blind?  Hehehe.  But to be fair, the fishing crew didn’t know the bigger ship was grounded and requested information from Samoa Ports Authority and Fisheries about the ship in the way but “They didn’t reply to us.”  (Again, “only in Samoa… gee I’m glad Samoa is the way it is”.)

I also get the other feeling when I hear about the road switch.  (”Gee, I’m glad I don’t live there”.)  I’m sure many Samoans abroad are glad their not back home dealing with the impending road switch.  It seems like a nightmare.  Having recently come back from Samoa, that’s all everyone and anyone talked about.

But I half agree and half disagree with the protesters.  I don’t think the road switch will be as bad as people fear.  In fact it might make some of the taxi drivers BETTER drivers as everyone should be extremely cautious on the roads.

It does make you wonder why the switch wasn’t made before the recent roading infrastructure for the build up for the South Pacific Games 2007.  But it’s better it’s done now before any more development is made.  Once infrastructure is in, it becomes costly to change.  Imagine Niu Sila trying to do the change?  That’d be a logistical nightmare! 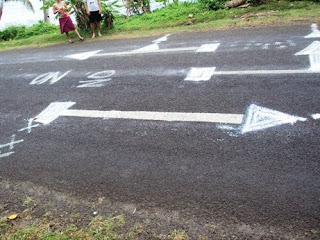 But I do agree with the protesters in that Tuilaepa Sailele Malielegaoi, Palemia / Prime Minister (PM) of Samoa can be a bit of a tyrant at times.  I’ve already written my spin on his outbursts on Frank Bainimarama of Fiti / Fiji, but sometimes people need to be heard.  His head strong will to get this switch through is not good politics.  Appeasing fears would be easy in Samoa.  But of course the Samoan political landscape is not like here in Niu Sila, which gives Tuilaepa a lot more free reign to act the way he does.

Only in Samoa can the Palemia call others names, retort cheekily to other international leaders, and thumb down dissent.  Only in Samoa can you bulldoze through with a road switch, change the rules on opposition parties and change the constitutional land rights of Samoans (other matters I blog about later).  But only in Samoa can I feel free to make such an opinion, because that is my homeland, they are my family, that is my history and my future.  Because only in Samoa it is Samoans for Samoans.

At the end of the day, I can sigh in relief and think “only in Samoa…”