Because someone beat me to the punch of “Checkers” lol, I moved on to Bingo. What a game. I actually have no idea to play the darn thing. lol Even when I yelled out “BINGO” because obviously I had bingo’d, thanks to Aunty Fuala’au who marked my paper along with her eight. Can we say “Addicted?!” haha 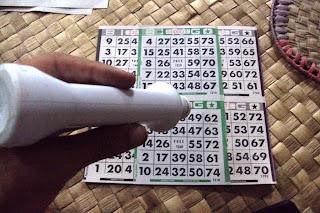 To this day, I have no idea how to play. I only know of: Up or Down, Across and Diagonal. Well, for those who are on the same page as me with Bingo, there are actually more ways than that.

First let me explain how the game came to be. The roots of the game far back as 1530. How crazy is that? That long ago. Amazing! But then, Edwin Lowe from New York, observed a game in a county fair in Atlanta, Georgia. At the time, it was called “Beano.” It was called Beano because those playing the game, when a number was called out, would cover the number on their cards with a dried bean. When a line on their card was covered, they would call out “Beano” and win a small prize.

Mr. Lowe saw how people were so totally addicted to it. He actually got into it as well. When he took the game back to his hometown, he introduced it to many of his friends and they would all play it. One time, one of his friends was so excited that they had won, they yelled out “Bingo” instead of the usual “Beano.”

So that’s how it went from Beano to Bingo as we know it now. “Lowe’s Bingo” started sweeping across the nation in the 1930’s. People all over the country were playing Bingo. From organizations to churches because of the fund raising potential.

Bingo prizes and jackpot. Usually the prize would be from $50 – $100. Some who host bingos, like the Native Reservations, do big time prize money like a million bucks. “Bingo say what?!” lol Jackpots are done by how much money is coming in. I was told that halls are required to payout at least 50% of the money they take in.  I’m just like “So, do the Bingo halls really payout at least 50% of the money they take in?” I’d love to do some investigating on that, but I’m in Samoa. So if I do, I’ve got a lot of family members who play Bingo. And if their preferred Bingo hall does not do required, they can close down. I will be hated for life. hahaha So let someone else close it down. lol

For some, it takes awhile to get to be the lucky one to call out “Bingo.” Others, it can be the first time, their first time, on the first session of the first night it’s given. They probably get stares up and down the ying yang. lol

Playing Bingo. Ok, so most of you would probably know how to play Bingo. As I’ve mentioned, I don’t. But learning all this stuff, I have to admit, I kinda sorta, not really but ok, know it. lol

So basically, when a number is called out you take your marker (I had to Google that to figure out the name of the thing lol) and cover the number that is being called out. So the Bingo card..

and when it’s being covered by the marker..

And when you’ve got a line covered (or whatever it is their doing such as, 4 corners, small kite, big kite, L, Black out..I know right?! “Bingo say what?!!”) you yell out “Bingo!” Once you’ve done that, an assistant or a floor walker (I didn’t know that’s what they were called. I once called a guy “Hey worker!” and he never came to my table. I now know why lol) will come to the table right away to verify the Bingo. The floor walker will call out the winning numbers for the caller to verify and will accept if correct or will reject the bingo.

If two people call bingo on the same number, the jackpot is split evenly between the two. The same with three, four, etc..

Almost everyone in my family plays Bingo. I’m SDA, born and raised and we don’t play bingo. But you’ll find a lot of Seventh Day Adventists at the bingo halls “dopping” their cards haha

You’ll find a concession stand at the bingo hall so don’t think you’ll starve there lol. They sell food, snacks and drinks. I have an Aunt who plays EVERY night at the Ili’ili Church, the nights their bingo hall is open. And she takes her own snacks, food and drinks. She says thats her luck. Her things. Ok, whatever you say, Aunty.

Speaking of luck, I’ve heard of some people referring to some seats as the “lucky seats.” “Bingo say what?” lol But it’s true. They feel that if they can go super early to get the lucky seats, they can be lucky that night. Others will take a lucky rabbit’s foot (like my mother when she goes lol), or other things they think is lucky for them. A newbie. Someone who has never played before is considered lucky. I was the victim to this with my Aunty Fuala’au. Ok, so I did bingo. But I didn’t think I was lucky. Until she had been lucky with every package offered that night. Aunty Fuala’au had a loot of almost 4 grand that night. Me? A grand. But it was the easiest grand I ever made. lol

Bingo is loved all over the world. I can for sure tell you that bingo is so loved by us Samoans. They play it everyday..Monday, Tuesday, Wednesday, Thursday, Friday, Saturday, Easter, Thanksgiving, Christmas, New Years, my birthday..lol just playing. Probably do though. But it seems like it’s a Samoan game. We’ve kinda made our thing.

You can be stressed, depressed, upset about something or whomever, yet you find them at bingo. It trips me out. They can be struggling, yet I find the whole family at the bingo hall. lol But it’s for a good cause right? The bingo hall in Iliili is either for the church, or for the Marist/Faasao High School. And the High School can really do with some funding. So yea, I guess it’s ok..in a way lol

0 thoughts on “Samoans and Bingo”