At the Otara Flea-markets, I always whip around to the t-shirt stalls to see what witty slogans and images people have come up with.  “The Sapelu’s” in the font of the TV show “The Sopranos”.  “Freshy” in the font of the drink “Fresh up”.  The “My mum can beat up your dad” t-shirt.  But one of the more popular t-shirts, and my personal favourite I bought a few years ago, is the one stating:  “There are two kinds of people in this world.  Samoans, and those who wannabe.”

Being involved in a few Pacific Island student bodies at Uni, I noticed a lot of resentment against Samoans.  Actually, let me rephrase that.  I noticed that, we Samoans have a superiority complex over other Pacific groups (including Maori), which make some resentful of us.  In Niu Sila / New Zealand, Samoans make up almost half the Pacific Population (131,100 or 49% of 265,974: 2006 Census).  87,003 Samoans live in Aukilani / Auckland alone.

I’m not sure if it was exactly brainwashing by my parents, but growing up us kids we always felt proud to be Samoan.  But it always seemed to be more than a feeling.  It felt like it was in our blood.  This supposed biological trait ’special only’ to Samoans were confirmed by the reaction of other Samoans I met throughout my life.  We all felt there was something special to being Samoan, something inherent, something born in us.

Therefore, it isn’t hard to see how other people could interpret that Samoan pride into Samoan arrogance.  Of course some of us Samoans would cheekily quip back with that line on my favourite t-shirt: “you’re just a wannabe Samoan”.  Hence the popularity of the t-shirt.

But here in politically correct Niu Sila, when we talk straight faced to other people, we wouldn’t admit to our supposed superiority complex, but deep down in our dark little subconscious closet, we tuck under the third shoe box from the left on the top shelf, that idea that because we are Samoan, we can do great things.  And I guess that’s where it starts from.  We Samoans don’t think other people are inferior, just that being Samoans is the best thing to ever happen to us!  I’m not sure I’m doing it justice in my attempt to describe this inherent feeling Samoans have about ourselves.  But it’s there, built in us.  And unfortunately we flaunt it around a bit that we tend to be blind to the others we knock over with it.

Pacific Islanders only make up 6% of the total 4.3 million population of Niu Sila.  Therefore, only 3% of the total population are Samoan.  Cutting the small piece of the pie into smaller pieces is always going to cause some friction.  But for many Palagi bureaucrats, lumping us all into one label, “Pacific Islanders”, was suffice for them to administer us brown folk.  Therefore any policy developed in the last 20 years for Pacific peoples in Niu Sila was often heavily influenced by Samoan New Zealanders, as we are the largest group and occupied many of the roles that formulated policy.

Soon the word “fono” was being used for any type of Pacific Island meeting with Government agencies.  The customary process of forgiveness in Samoan culture, “ifoga”, also entered the Palagi legal consciousness.  Everything Pacific Island in Niu Sila really meant ‘Samoan’.  Even on a colloquial level, after influences by Samoans on TV (BroTown, The Semisi’s etc), “Talofa”, “sole”, “Fa!” and even “fafafine” all entered the Niu Sila vocabulary.  And to us Samoans, we were largely oblivious to it, while some people in the smaller Pacific groups were not.

But this sub-conscious self belief in being Samoan is by no means restricted to Samoans here in Niu Sila.  We point to Amelika / America where there are Samoans: The Rock Dwayne Johnson, Mufi Hannemann (Mayor of Honolulu City), Eni Faleomavaega (Congressman) Troy Polamalu and Mosi Tatupu (NFL players), and the Boo-Yaa T.R.I.B.E.

Even our very own Samoan Palemia / Prime Minister, Tuilaepa Sailele Malielegaoi has been showing a bit of that Samoan arrogance lately, against Commodore Voreqe (Frank) Bainimarama of Fiti / Fiji.

Back in February, Tuilaepa was unsure of what state of mind Bainimarama was in when he made comments about Samoa, Samoa’s relationship with Niu Sila and the Pacific Islands Forum. “I’m curious if he [Bainimarama] was sober or perhaps there was a full moon out that night,” Tuilaepa speculated.  Asked what he thought of Bainimarama’s claims that Samoa, Ausetalia / Australia and Niu Sila ganged up on Fiti at the Pacific Islands Forum, Tuilaepa giggled.  “No, no, no, I think the good commander (Bainimarama) was misquoted by the media. What he may actually have meant was that the maturity of Samoa’s leadership is on par with that of New Zealand and Australia . That’s obviously what he meant.” Nods head. “Therefore, given that seniority, he should be keen absorb my tit-for-tat.”

This exchange was over Fiti’s current situation, where military man Bainimarama had overthrown the democratically elected Government of Fiti in 2006 and has since imposed military rule until what he perceives is a proper constitution is in place.  It was also reported that Tuilaepa believed that Bainimarama had a problem comprehending the issues involved.  “Therefore I’ll speak to him frankly from one Pacific islander to another Pacific Islander in a very clear and direct language that I’m sure he will understand.” And why does Fiti need an army for anyway, the Palemia quizzed.  “Perhaps Bainimarama fears a combined canoe attack from Tuvalu and Kiribati, its closest neighbours. That must be it.” Tuilaepa nodded his head.

That was back in February.  And today?

Samoa Observer reported yesterday Tuilaepa called Bainimarama mentally ill.  “Only the ‘mentally ill’ do what the Commodore has done in Fiji”, the Palemia said.  He said Bainimarama was no different from Adolf Hitler since all dictators think alike.  Tuilaepa made the comments while condemning the latest development in coup-ridden Fiti where the Constitution has been purportedly abrogated amidst a host of nasty incidents.  Tuilaepa believes the military chief forced President Ratu Josefa Iloilo behind the scenes at gunpoint to reappoint him as Prime Minister.

While Tuilaepa’s sentiments would’ve rocked a few boats if it were said by any other national leader, the only rocking of boats amongst Samoans themselves will be from all the giggling in delight.  Tuilaepa may be an arrogant, straight up, no-nonsense man, but Samoan people admire these traits as confidence (which has subsequently scared the recent Samoan opposition into non-opposition parties) and witty one-liners.  It’s not a Samoan saying, but if sticks and stones hurt you, you shouldn’t be in politics.  I think again, it all comes down to that Samoan self-belief that as a Samoan you can do great things, and also say things and get away with it. 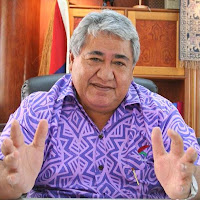 The same self-belief is probably driving another motive for Tuilaepa.  For Samoa to overtake Fiti as the regional Pacific Islands power-house.  As Fiti has stumbled with all the political coups in the last 20 years, Samoa has prospered.  There has always been a traditional rivalry between Fiti and Samoa (and Toga / Tonga).  But Samoa never recovered from the partition of the islands into Amelika Samoa / American Samoan and Samoa i Sisifo / Western Samoa, until recently.  That split allowed Fiti over the years to be the hub of the Pacific, with many of the regional headquaters run out of Suva.

Fiti is lucky because it is linked to the Melanesian islands through biology, but culturally they are Polynesian.  Therefore, Fiti has allies amongst the Melanesian countries (They also have a loose co-alition under the Melanesian Spearhead Group).  Whereas Samoa’s history in some of those Melanesian nations have only been about Samoan missionaries (EFKS) being sent over to convert the ‘heathens’ into God-fearing Christians.  Samoan Missionaries had the same arrogant and ignorant puritanical zeal that Palagi missionaries had.  Of course that only fed the Samoan superiority complex over other Pacific peoples.  As for a Polynesian alliance?  Well half of Samoa is with Hawaii, under Amelika.  The majority of eastern Polynesian is part of Falani / France.  Niu Sila is majority Palagi, and controls To’elau / Tokelau, Niue and the Lalotoga / Cook Islands.  Toga is undergoing a crisis with it’s monarchy.  And Tuvalu is sinking.  Hmmm?  But Samoa has once again felt the wind of change and wants to capitalise on Fiti’s downfall.

See, it’s all to do with that self confidence we Samoans have.  And again, we leave ourselves open to accusations of arrogance by other people…  And yeah, those other people are probably right.

But as a typical Samoan, ah well.  Where’s that favourite t-shirt of mine?