My younger (but bigger) brother has been wearing my black expensive work shoes out clubbing during the weekend.  He’s kinda stretched the shoes now, and the other day I walked through a puddle and felt the wetness soak through my left sock.

“Have to buy a new pair of shoes shammit!”

I love my shorts and se’evae tosotoso (jandals, flip flops, thongs).  So when I first started work it was pretty hard tryna get use to having to wear a suit a tie.  After years at varsity wearing what I felt comfortable in, I now had to conform to the stiff and proper attire of corporate wear.

Mind you it’s not too bad.  It’s kind of like back at high school, where wearing a school uniform meant you didn’t have to worry about wearing something different from what you wore the day before.  While you definitely had to have at least three sets of school uniform, being an active teenager often meant one day’s worth of wearing the school shirt, was enough for it to go in the wash when I got home.  On a hot summers day even a few sprays of deoderant couldn’t disguise it enough to justify wearing the same shirt the next day.

But also like a school uniform, wearing a suit and tie is damn expensive too.  Especially when trying to keep a selection of suits and shirts.  Not that suits come in a range of colours.  “Hmmm?  What should I wear today?  Black, dark grey or black?”  At work, we have casual Fridays.  While at other workplaces that might mean jeans and a tee, at my work it means your usual Monday to Thursday clothing… except a tie!

What the heck is a tie for anyway?  A strip of material to fasten around the neck to make you feel that much more uncomfortable in the hot suit?  Give me jandals and an ie faitaga / formal lavalava anyday. 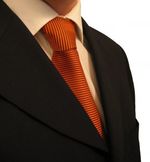 This got me thinking about the time I lived in Samoa a few years back, and how my cousin stayed with us in Apia to attend the Le Iunivesite Aoao o Samoa / National University of Samoa (NUS).  The first morning I saw my cousin walk out the door in a blue pea (woman’s two piece dress).  Thought it must be an induction day thing.  But the next morning she wore it again.  It wasn’t till the second week of wearing the pea I got a bit suspicious.  Is she really going to NUS?

But sure enough, my aunty who lectured at NUS told me its the Iunivesite / University’s student uniform!  Uniform at varsity???  Try pulling that one off at a Iunivesite in Niu Sila / New Zealand, and you’ll see how far that’ll get you.  My aunty said it was student driven, and even worse, they were trying to make staff wear a uniform too!

I got a good chuckle that day.  But it shouldn’t have surprised me.  Walking through Apia you’d see nearly every worker, whether it’s for the private sector or the Government, all wearing a uniform.  My aunty says it’s a status thing.  To be known as the person that works for the bank, or the kid that got into NUS, or the other person that works for the Government… it gave you an elevated status, something to be proud of.

In Aukilani / Auckland, beyond most retail and service sector jobs, you’d be hard pressed by to get a workforce wanting to wear a uniform.  And you go to Iunivesite to be an individual after years of conforming, not to boast about in your clothing.

But I guess Samoan workers have something on those of us who have to wear corporate attire here in Niu Sila… comfort!